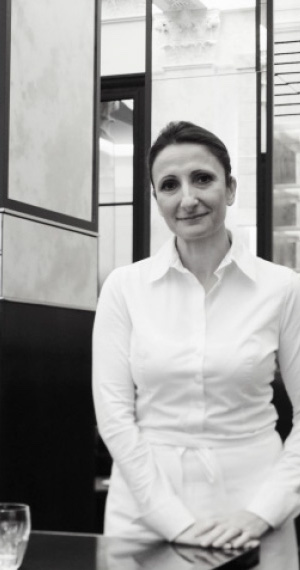 Anne-Sophie Pic is the most decorated Michelin starred female chef in the world, currently holding eight Michelin stars across her five restaurants. For several generations her family has played an integral part in the history of French cuisine. Her family’s restaurant Maison de Pic in Valence originally won three Michelin stars under her grandfather Andre in 1934 and later, after her father became involved, he also gained the honour of achieving three Michelin stars for the restaurant.

Initially rejecting the family trade, Anne-Sophie did not consider life as a chef until the age of 23. Following the sudden loss of her father and subsequently the restaurants third star in 1995, Anne-Sophie took to the kitchen and with no formal training managed to steer the restaurant back towards this extraordinary achievement, gaining three stars of her own in 2007.

Anne-Sophie’s signature style cannot be found in a single dish but rather in her imaginative approach. Continually exploring and creating complex new flavour combinations, her love of experimenting with undervalued ingredients and flavours such as beetroot, turnip and cabbage – have contributed to some of her most interesting dishes. With the opening of La Dame de Pic London, Anne-Sophie is delighted to be able to share her passion and creativity with a new audience and introduce her unique culinary identity to the London food scene. 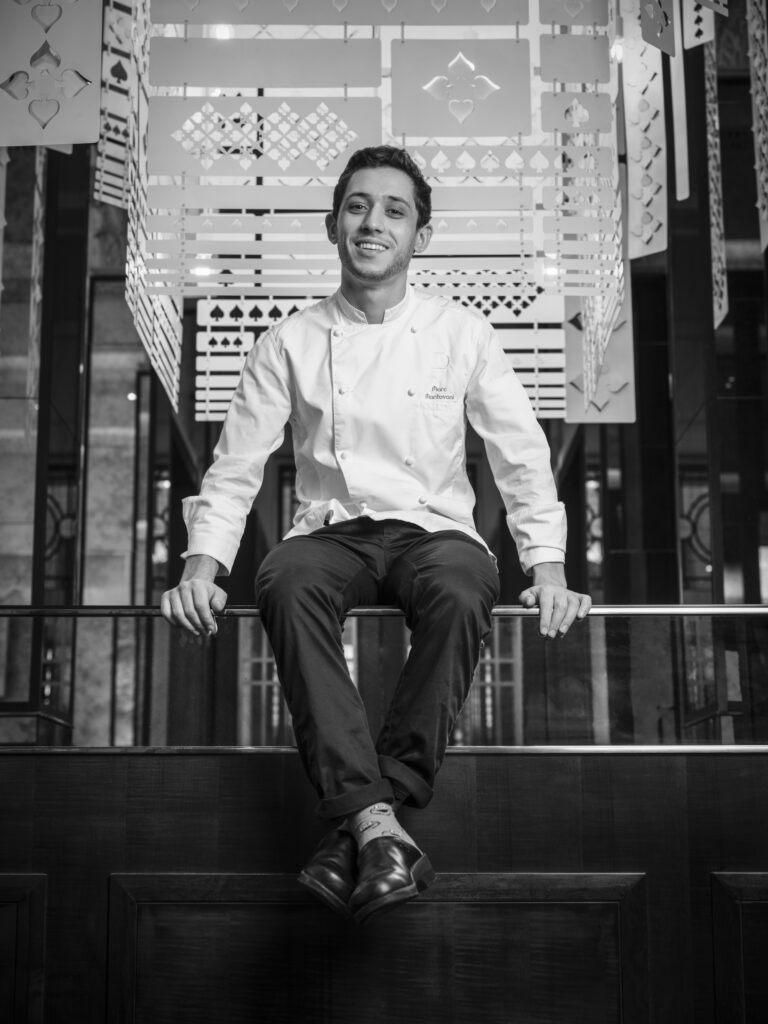 Marc was born and raised in the mountains of Valence, France, and started his culinary journey at a young age.

He trained at La Reine Jeanne in Les Baux-de-Provence where he discovered his passion for classical, old-school French cuisine. Shortly after his training, he joined his first Michelin-starred restaurant with Bruno d’Angelis at Hotel de Europe in Avignon.

His career quickly progressed within the restaurant, and he and Pic developed a strong relationship. He brings with him to La Dame de Pic London at Four Seasons Hotel London at Ten Trinity Square the rich experience and values that he gained while working with Anne-Sophie. His passion for nature (especially forests) and a strong philosophy of dining with all five senses inspires his own personal style of cooking and the dishes that he creates. 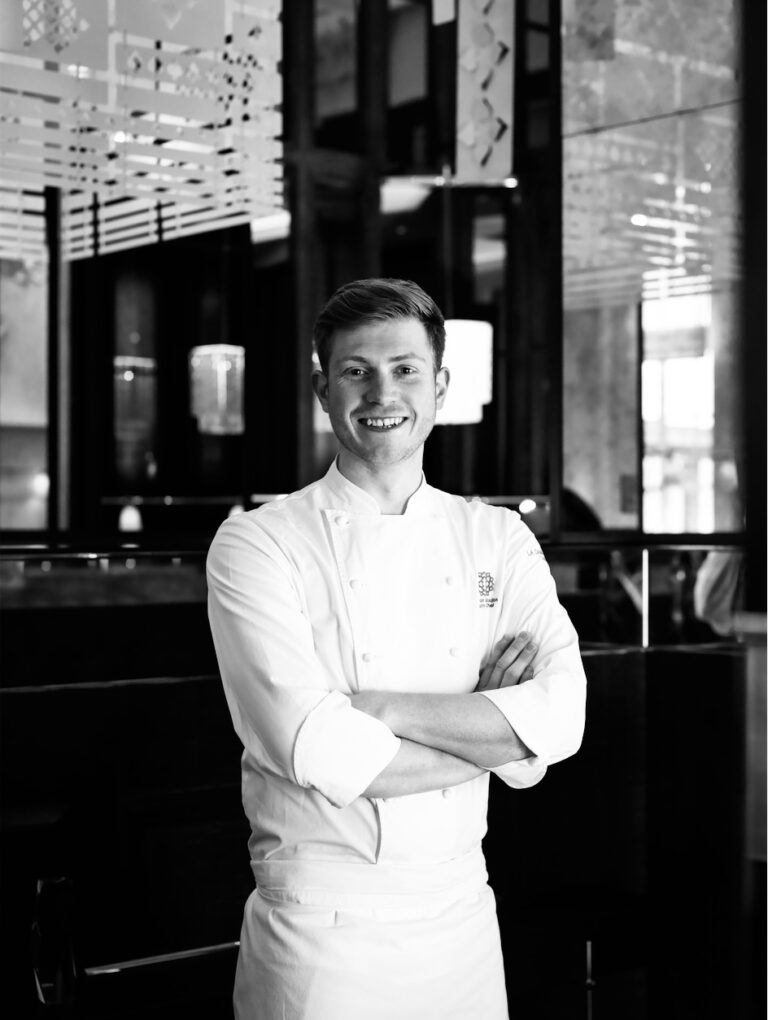 From a young age, Sylvain wanted to work in the kitchen. Born and raised in Burgundy, surrounded by nature and an abundance of vineyards, he originally aspired to be a baker and at the age of 15 enrolled in Lycée Le Castel to pursue his dream. His first professional experience was at La Pinède de St Tropez with Arnaud Donckele (3*). Inspired by his passion and energy, Sylvain discovered a cuisine with classic dishes from South of France that the Chef modernised and made his own.

Sylvain went on to work at Les Barmes de l’Ours (1*) in Val d’Isère and Chabichou, in Courchevel (2*) before joining the team at Maison Pic in Valence in 2011 as Demi Chef de Partie, moving on to become Sous Chef in less than a year. At Maison Pic, with Anne-Sophie as his mentor, he learned about the associations between different flavours and scents, unexpected combinations, the use of rare and unusual herbs and engaging all five senses when cooking.

In 2016, Sylvain moved to London to join the team as Head Pastry Chef for Anne-Sophie’s debut UK restaurant, La Dame de Pic London. Inspired by the mix of cultures and the diverse international culinary scene in London, Sylvain continues to develop his incredible knowledge and expertise.

Growing up in a family of chefs and restaurateurs, Stephanie has always had the hospitality industry in her blood. “My father is a chef, both of my uncles are chefs and my great grandfather was also a chef,” says Stephanie. “My family has always loved food and would travel miles out of their way to try an iconic restaurant.”
After graduating from Ecole Hotelière de Lausanne, Stephanie began her first role with Four Seasons Hotel des Bergues Geneva in the food and beverage department and moved to the sales team, where she was able to develop her skills and grow her experience with Four Seasons.
After transferring to London in 2017, Stephanie was introduced to the city’s dynamic restaurant scene and realised that she missed the buzz and excitement of working in restaurants. Stephanie was appointed General Manager in 2019.
“I’ve always been inspired by Anne-Sophie Pic – I too have come from a family of chefs and I feel it gives me some understanding of what she went through to be where she is today. Being a woman in this masculine industry is a challenge, and that only makes me admire her more. She has created a unique culinary identity that sets her apart from any other chef, telling a story with each dish.”

Joining from Restaurant Gordon Ramsay in Chelsea, Jan’s distinguished selections of wines have been frequently recognised by critics as one of the finest in London, and over the course of his career he has achieved a number of accolades including winner of the Moët UK Sommelier of the Year and Harpers Best Sommelier awards.

Originally from Lüneburg, Northern Germany, Konetzki spent the early part of his career as a waiter in Hamburg before recognising his passion for wine and training as a Commis Sommelier. In 2007, he moved to London where he joined the team at Maze and gained extensive experience in the preliminary stages of the restaurant’s opening. Konetzki’s skill was soon recognised and he progressed quickly to Head Sommelier at three-Michelin star Restaurant Gordon Ramsay.